10 Years After Sandy in Prospect Park

It has been 10 years since Superstorm Sandy arrived in New York City, taking lives and leaving a path of destruction in its wake. As Brooklyn residents at the time will remember, Prospect Park was extremely hard hit by the storm and the work to recover and rebuild for the future has spanned the past decade. Revisit the timeline of the Superstorm Sandy events and how they have shaped the park today:

When Superstorm Sandy arrived in the New York City area on October 29, 2012, the winds caused widespread destruction in the park. All told, the storm felled over 500 trees throughout the park, including 50 trees around the Children’s Pool at the Vale of Cashmere. Revisit footage of the aftermath of the storm in Prospect Park from WNYC.

The Alliance worked to address storm damage in the Vale, in the Park’s northeast corner: cleaning up downed trees, resetting damaged boulders, and planting native trees and shrubs in order to stabilize the Vale’s slopes. 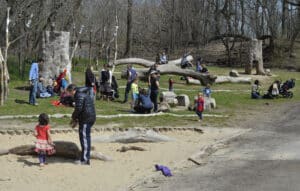 The Zucker Natural Play Area utilizes trees that came down in Hurricane Sandy.

A year after Superstorm Sandy, some of the downed trees found new life in the Donald and Barbara Zucker Natural Exploration Area. Tree trunks and branches were used by Prospect Park Alliance to create a new play area for children, where natural materials took center stage and imaginations ran wild. The Exploration Area was an instant hit and continues to be a beloved destination for families in the park.

The Alliance received $1.2 million in funding from the National Parks Service through the Hurricane Sandy Disaster Relief Assistance Grant Program for Historic Properties, administered by New York State Office of Parks, Recreation and Historic Preservation, to restore the Vale and Lookout Hill (another damaged area) to a healthy, native woodland habitat. With this funding, Prospect Park Alliance began in earnest the work of deliberate and significant restoration work in these storm-ravaged areas of the park. 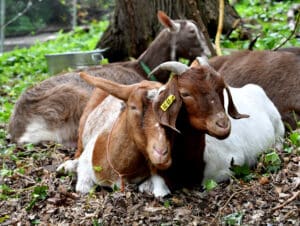 A crew of goats, hired to aid in the restoration work.

In areas of the park where trees fell, invasive plants were able to thrive and overrun the natural ecosystem. Steep slopes and poison ivy made clearing these areas a daunting task for staff, so Prospect Park Alliance called in the experts—a herd of goats! In 2016 and 2017, Prospect Park Alliance brought goats to Prospect Park as part of its woodland restoration efforts in the Vale in the park’s Northeast Corner and Lookout Hill. Instant Brooklyn celebrities, the goats were extremely efficient workers and relished the work of clearing delicious (to them) poison ivy. With full bellies, the goats finished their Prospect Park work season in October 2017, making way for new plantings in the park.

Prospect Park Alliance brought on a three-person crew to undertake the intensive restoration work necessary in the areas of the park affected by Hurricane Sandy. Tree inventories and health and hazard assessments were completed to quantify and prioritize the removal of damaged trees, including nonnative species that are detrimental to the ecological health of the woodlands. The crew selected a plant palette of climate-resilient and beneficial native plant species to replant in the area. The areas most affected by the storm became hotspots of year-round activity, with the crew and a dedicated team of volunteers hard at work.

In October of 2017, exactly 150 years to the day that Olmsted and Vaux opened Prospect Park’s doors to the public for the first time, Prospect Park Alliance volunteers and staff rolled up their sleeves and got planting in the Vale. Over 20,000 trees, plants and shrubs were planted—a selection aimed at building a healthy and long-lasting forest habitat for birds, wildlife and humans alike. A finishing touch to the lower Vale area was the installation of a rustic woodland trail, which brings accessibility into the heart of the restored area and invites the public to experience the forest as it grows. The work completed was comprehensive and has been a success: this portion of the park has been restored to strong ecological health which will benefit the park’s plant and animal communities long term. The work in this area was undertaken by Alliance staff including the Hurricane Sandy Crew, and was supported along the way by a dedicated team of Prospect Park Alliance volunteers and the members of the Woodlands Youth Crew.

These years of hard work to recover from the damage caused by Superstorm Sandy continue to inform Prospect Park Alliance’s work to sustain the park now, and as we look to the future. The restored areas of the landscape in the Northeast corner of the park are flourishing and providing a blueprint for the work that is planned throughout the Vale area and beyond in the park to make our landscapes resilient as we face the challenges of the climate crisis and work to improve the park for the people, plants and animals that depend on it.