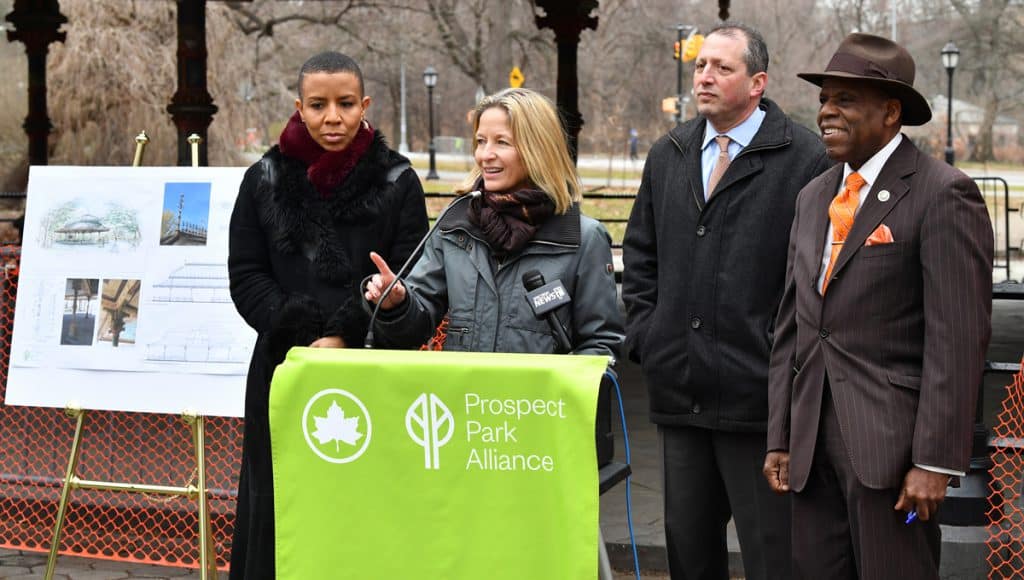 With New York City now in the first phases of re-opening, Prospect Park Alliance is back up and running on a number of park improvement projects, from the Flatbush Avenue perimeter to the Long Meadow Ball Fields. Construction completion dates are currently being finalized. Learn more about park improvements on our Capital Projects Tracker.

Concert Grove Pavilion
Through funding from former New York City Council Speaker Melissa Mark-Viverito and the Brooklyn Delegation of the New York City Council, Prospect Park Alliance is undertaking the $2 million restoration of the Concert Grove Pavilion. This pavilion was closed to the public in 2014 due to structural damage. The Alliance is restoring this historic structure and add new lighting to return this cherished community space to public use.

Flatbush Avenue Entrances
This $3.2 million project, funded by Mayor Bill de Blasio through the Parks without Borders program, enables the Alliance to create two new entrances along the park’s Flatbush Avenue perimeter: the first new entrances to the park since the 1940s. A major entrance is being created in the northeast section of the park near the Rose Garden and a minor secondary entrance is being created just north of the Prospect Park Zoo. The entrances feature new lighting, seating and trees, as well as new plantings. The major entrance will feature two levels of terraced seating that provides views of the surrounding woodlands. Stepping stones will lead to an informal running trail atop a berm; and the landscape will also feature a rock scramble of boulders sourced from the building site of nearby NewYork-Presbyterian Brooklyn Methodist Hospital.