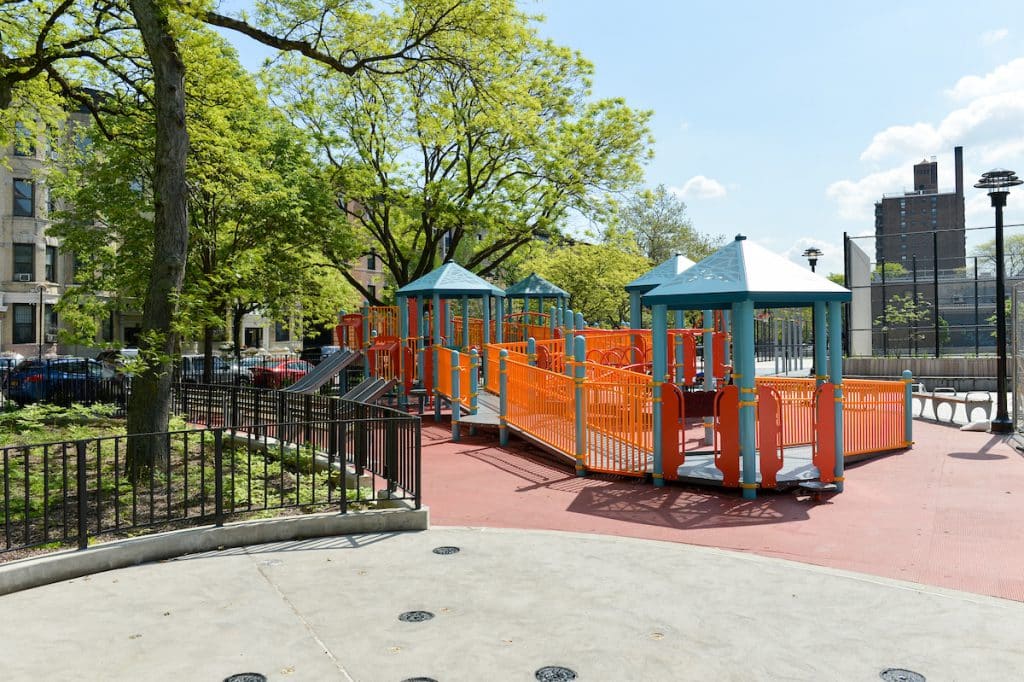 On September 8, a groundbreaking ceremony in Crown Heights kicked off the $5 million redesign of Stroud Playground, which was undertaken pro-bono by Prospect Park Alliance as part of Mayor Bill de Blasio’s Community Parks Initiative. The new design fits many amenities into a compact, one-acre space for the benefit of the community and the two schools it serves.

“The Alliance brought decades of expertise in designing award-winning playgrounds in Prospect Park to this project, and we were pleased to be able to contribute to the Community Parks Initiative,” said Alliance President Sue Donoghue. “We are thrilled to have worked on this new design for Stroud Playground that will strengthen and revitalize this cherished community space.”

The Community Parks Initiative is a citywide plan orchestrated by NYC Parks to renovate parks in communities with the greatest need through capital funding, programming and strategic partnerships. The project also received funding from Council Member Laurie Cumbo.

“It was a truly special experience working with the Prospect Park Alliance, Council Member Cumbo, and of course, the many passionate community members who came to our public input meeting to be a part of the design process,” Commissioner Silver said in a statement. “As a result, Stroud Playground will be transformed into a place that can be enjoyed by people of all ages.”

Through a community engagement process, Crown Heights residents weighed in on what they hoped to see in the redesigned park. The innovative design by Prospect Park Alliance includes new play equipment for children of all ages and abilities, and an interactive spray shower. The basketball and handball courts are being expanded and a new synthetic turf area will accommodate open play. There will also be a new track and adult fitness equipment.

The landscape will be enhanced with a number of additional trees to help provide shade for the new seating area and benches, and beautify the space. A garden will serve as a quiet area for relaxation and serve as an outdoor classroom for PS 316 and MS 383 students. Security lighting and lower fencing will make the space safer and more inviting.

Stroud marks the Alliance’s first major design project outside Prospect Park. Construction is expected to take 18 months to complete. The Alliance is currently working on the redesign of Epiphany Playground in Williamsburg, also as part of the Community Parks Initiative.