Back to Advancing the Park
c. Paul Martinka

Prospect Park Alliance’s restoration of Endale Arch comprises years of research, dedicated work and a number of exciting discoveries as layers of time were stripped back. One of the first architectural elements constructed in Prospect Park more than 150 years ago, the arch was envisioned by park creators Frederick Law Olmsted and Calvert Vaux as a transporting entrance from the urban hubbub of Grand Army Plaza to the pastoral tranquility of the mile-long Long Meadow.

While the arch was intended to blend into the landscape, when Endale Arch opened to the public in the late 1860s, it was described as a “thing of beauty” by The New York Times. It provided safe pedestrian passage under the Park Drive—back then filled with horses, carriages and bicycles, nowadays with joggers, scooters and…bicycles. 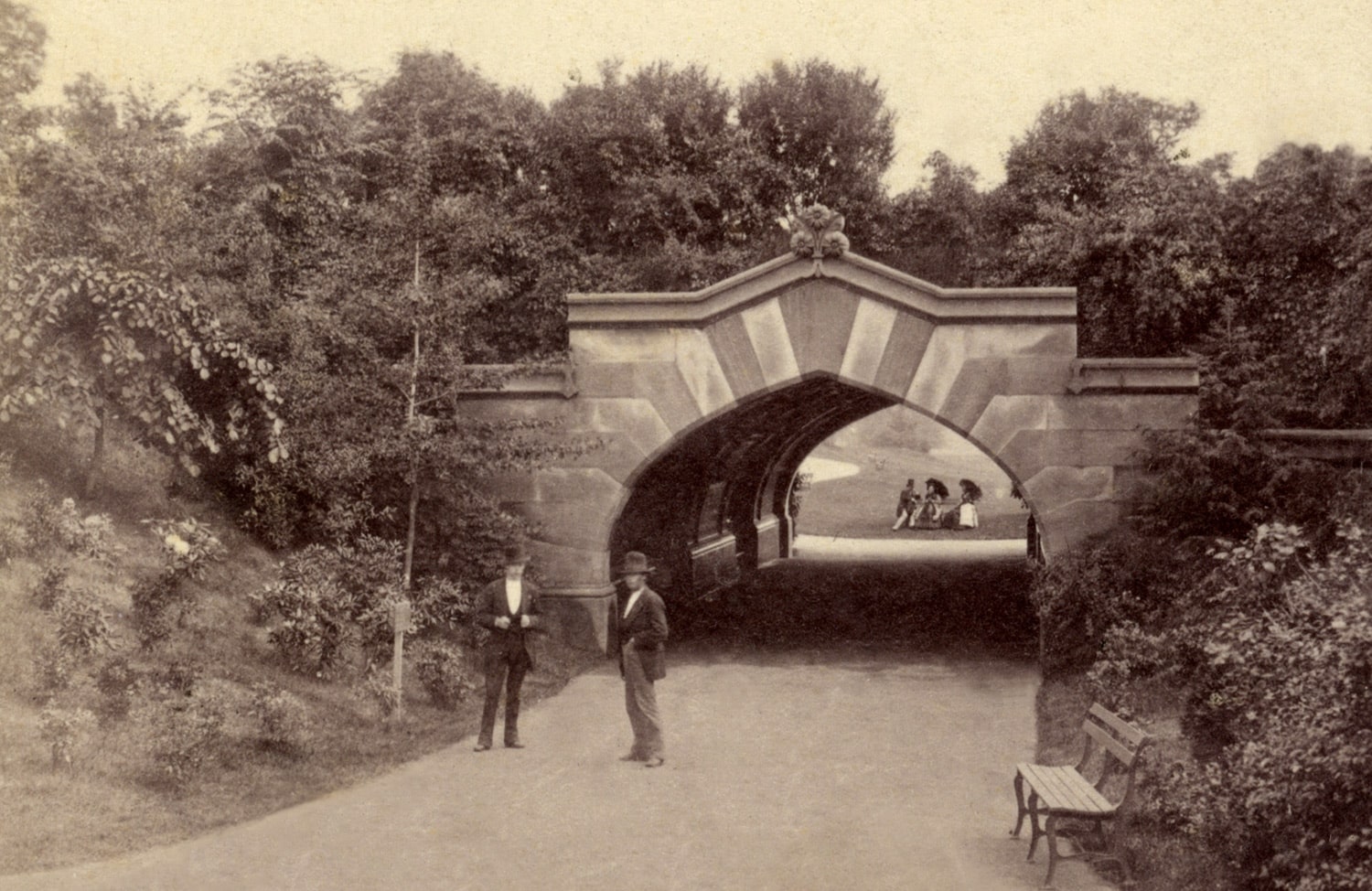 In the intervening decades, the arch fell into disrepair. Interior details were painted over with anti-graffiti paint and wood panels rotted away due to more than a century’s worth of water damage. On especially rainy days, the arch appeared less as a pedestrian walkway and more like a Venetian canal.

The phased Endale Arch restoration kicked off in 2015 with the adjacent landscape. The Alliance stabilized the stone retaining walls and surrounding hillsides; removed invasive plants and added an array of native plantings; and made improvements to the arch and pathway to address drainage issues and reduce potential flooding and water damage.

In the final phase, the Alliance worked with Barnhart Restoration to restore the interior of the arch and the exterior stonework. In the course of this phase, layers of paint and grit were peeled back, revealing handsome original details that the design team was surprised and delighted to find. An alternating color motif—on the exterior of yellow Berea sandstone and New Jersey brownstone, on the interior white pine and black walnut wood paneling—hidden for nearly a century has been restored.

Left, paint is stripped back to reveal an alternating motif of white pine and black walnut paneling. Right, craftsmanship details of the newly restored arch including wood paneling as well as one exposed  brick and granite cross vault.

The design team uncovered many beautiful details that underscored the impressive craftsmanship of the construction. They opted to leave one cross vault exposed to showcase the brick and granite structure, including patterned brickwork that  accentuates the curve of the vault. From this exposed vault, one can see how the wood trim comes together to meet at one point at the top of the vault, bending on multiple planes to achieve its shape. Now twenty-first-century visitors can see for the first time this painstaking work from 150 years ago.

With the opening of the newly restored arch, visitors are now able to enjoy the arch as it would have appeared to the park’s earliest visitors, with the added benefit of new LED lighting that illuminates the interior of the arch. The result is a breathtaking window into Prospect Park’s historic past.

The $500,000 project was generously funded by the Tiger Baron Foundation, with additional support from Council Member Brad Lander through District 39 participatory budgeting.

Explore Endale Arch and other points of interest in Brooklyn’s Prospect Park. 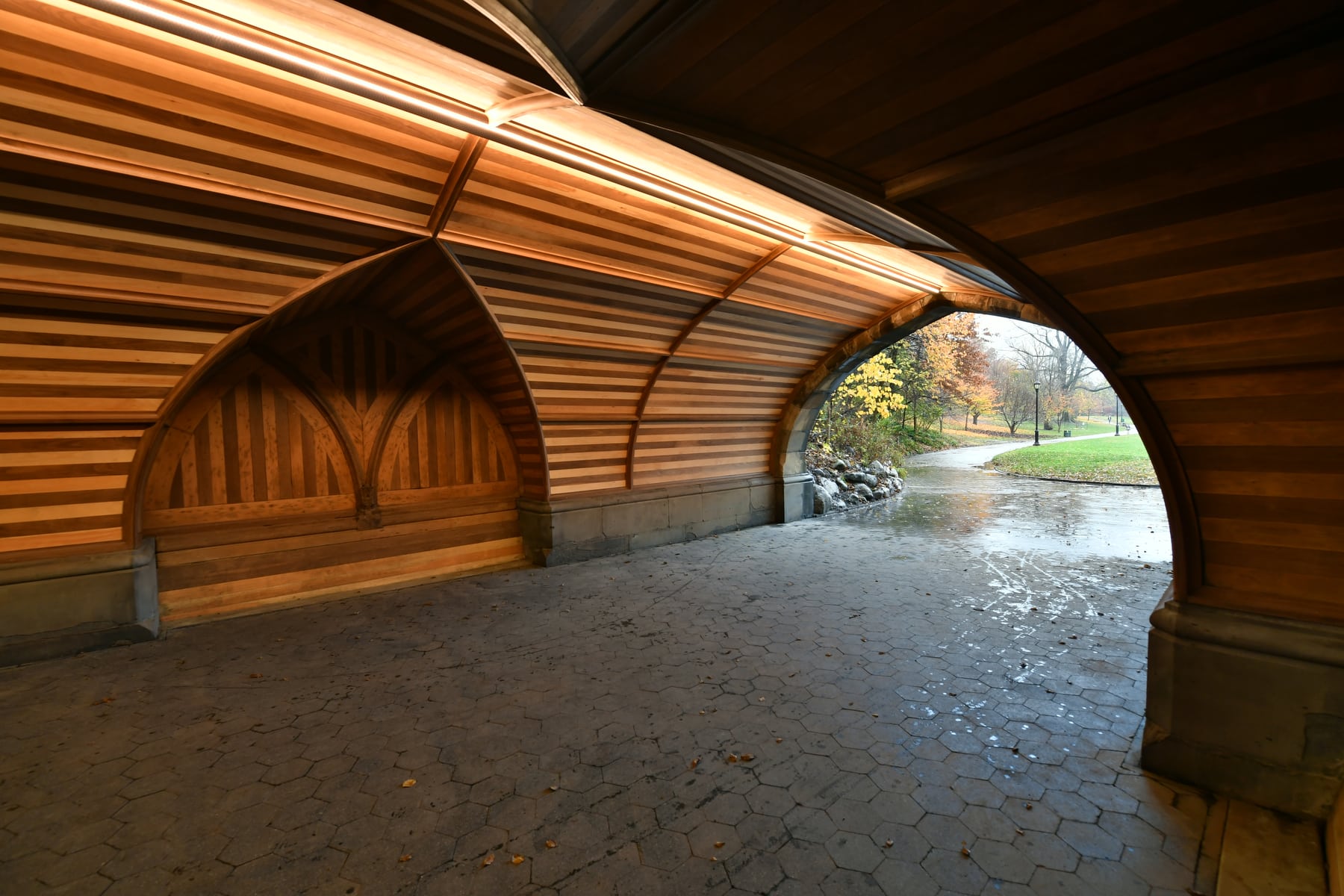