Update, August 2018: The weed harvester has been named! With over 700 votes tallied, the winner by a margin of 30 votes is, “The Floating Goat.” Learn more about the public naming contest.

City Council Members Brad Lander and Mathieu Eugene funded this $140,000 machine through the Participatory Budgeting Process; and were on hand to launch the vehicle and join Prospect Park Alliance President Sue Donoghue and members of the Alliance’s Natural Resources Crew on the inaugural trip around the Lake. This project is part of a broader focus by Prospect Park Alliance, the non-profit organization that sustains the park, to care for the Park’s natural areas. 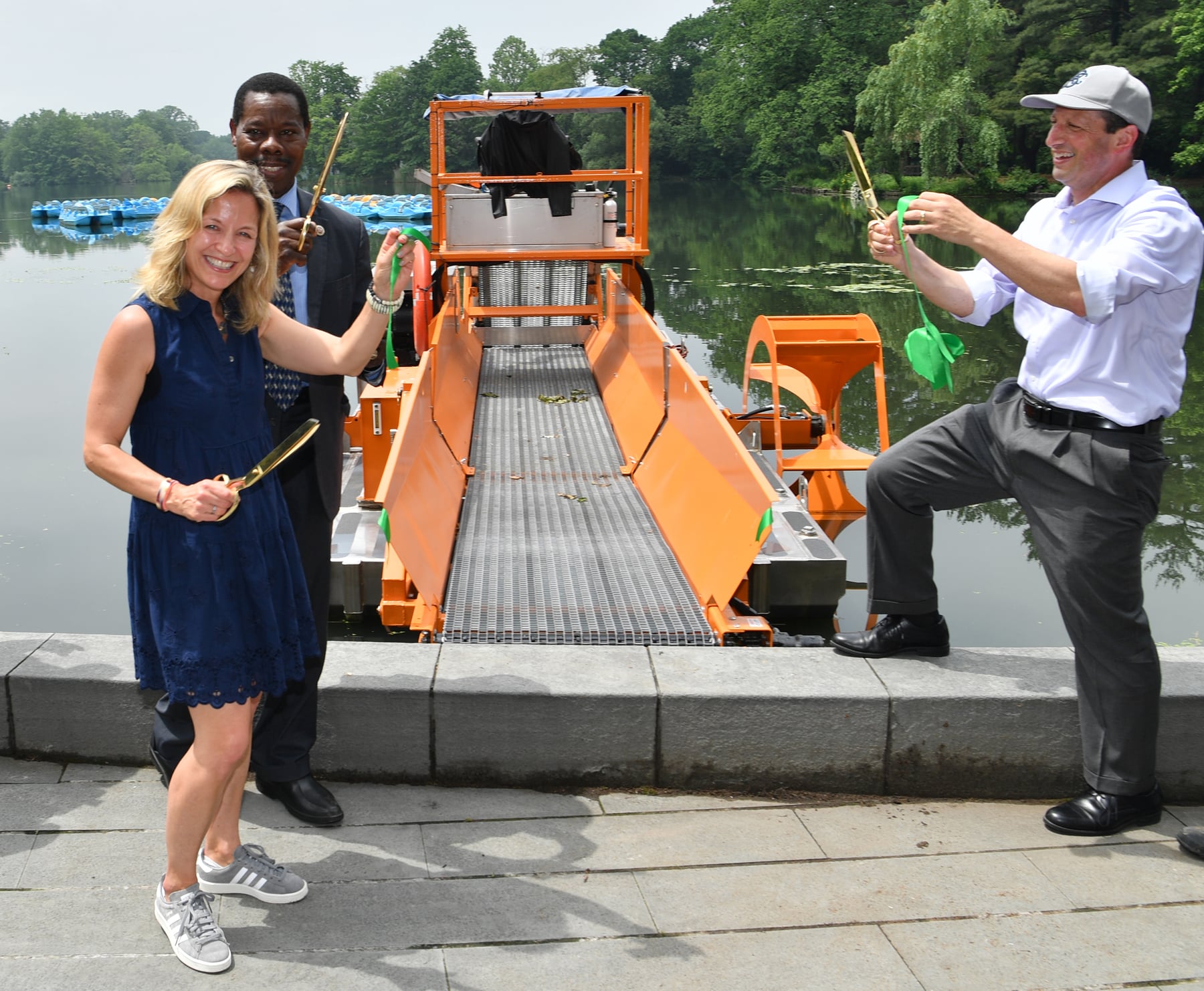 “Prospect Park Alliance’s Natural Resources Crew works tirelessly to maintain the health of the Park’s natural areas, including this 55-acre body of water—Brooklyn’s only Lake,” said Prospect Park Alliance President Sue Donoghue. “Thanks to Council Members Brad Lander and Mathieu Eugene, and everyone who took part in the Participatory Budgeting process, today we get to cut the ribbon on this exciting new piece of machinery that will provide an environmentally sound method for the Alliance to control weeds and improve the water quality of the Prospect Park Lake.”

“The new aquatic weed harvester is one of many exciting improvements in Prospect Park that will help keep one of Brooklyn’s most heavily used resources in great shape, especially during the busy spring and summer seasons,” said NYC Parks Commissioner Mitchell J. Silver, FAICP. “We greatly appreciate the investments from our local elected officials that allow us to better care for one of the borough’s most beloved public spaces.”

“I’m thrilled to take part in the unveiling of the newest tool to reduce invasive weeds and keep Prospect Park Lake healthy– this Aquatic Weed Harvester” said Council Member Brad Lander. “It’s always exciting to see a Participatory Budgeting project idea become a reality, and I want to extend my deep thanks to Prospect Park Alliance for their work in making this happen. I also want to thank our district’s 2016 Participatory Budgeting Parks Committee, as well as delegates August Wendell, Josh Torpey, and his son Nicholas, who at the time was the youngest PB delegate! Without their work, this project would not have been possible.”

“As a longtime advocate for Prospect Park, I am honored to partner with Council Member Brad Lander, the Prospect Park Alliance, and the Participatory Budgeting Project to allocate $140,000 in funding for a new Aquatic Weed Harvester,” said Council Member Mathieu Eugene. This state-of-the-art machine is designed to significantly improve the water quality of Prospect Park Lake, which will in turn provide a long term benefit the park’s ecosystem. I also want to commend our constituents who made this initiative possible through the Participatory Budgeting Process. Today’s event is a reflection of our shared commitment as a community to protecting green spaces for future generations of New Yorkers.”

A photo op will be scheduled in the coming weeks when the “Floating Goat” is decaled.