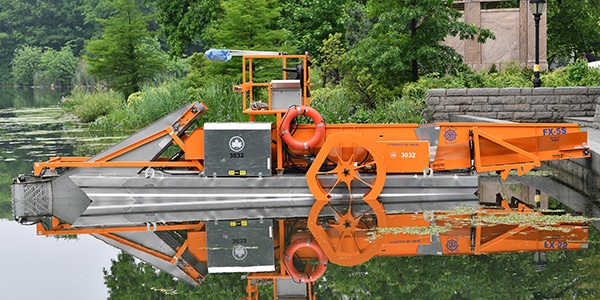 When Prospect Park Alliance President Sue Donoghue and City Council Members Brad Lander and Mathieu Eugene celebrated the launch of a brand-new aquatic weed harvester, it kicked off a contest to name the new machine. Over the course of six weeks, over 300 entries were submitted, narrowed down, and voted on by the park community. With nine final options and over 700 votes tallied, the winner by a margin of 30 votes is, “The Floating Goat.”

The weed harvester offers an environmentally sound method for Prospect Park Alliance’s Natural Resources Crew–a dedicated crew that cares for the park’s natural areas–to control excessive aquatic weed growth, such as floating water primrose and duckweed. Keeping these weeds at bay helps address the water quality of the 55-acre Prospect Park Lake. City Council Members Brad Lander and Mathieu Eugene funded this $140,000 machine through the Participatory Budgeting Process; and were on hand to launch the vehicle in June 2018 and join Prospect Park Alliance President Sue Donoghue and members of the Alliance’s Natural Resources Crew on the inaugural trip around the Lake. This project is part of a broader focus by Prospect Park Alliance, the non-profit organization that sustains the park, to care for the Park’s natural areas.

An earlier aquatic weed harvester had been dubbed, “The Lake Mess Monster,” often shortened to “Messy.” The Alliance decided to open the naming of the new harvester to the public, and in the first stage of the public naming contest over 300 potential names were submitted, largely by local residents. Those entries were narrowed down by Alliance staff, and nine were chosen as the finalists to by voted on by the community. The options were as follows: Chompy, Da Pride O Lakeside, The Floating Goat, Harvey the Harvester, Lake Mess Monster II, The Little Orange Peel, Orange Crush, The Sea Slurpent, and Weedzilla. Voters were allowed one pick per email address and three weeks to vote.

When the voting ended, and more than 700 votes were tallied, the winner by a margin of 30 votes was, “The Floating Goat.” The winning entry was submitted by Jack Costas (8), a “lifelong Prospect Park adventurer and proud Alliance member.” The name was inspired by the Alliance’s resident goat herd, which was brought in by the Alliance in 2016 and 2017 as part of a Superstorm Sandy grant from New York State Parks to help clear invasive weeds in the park’s hard-hit woodlands. The aquatic weed harvester will accomplish a similar task in Brooklyn’s only lake, and the Alliance is thrilled to welcome yet another “Goat” to the herd. Costas will receive a Prospect Park Alliance “swag” bag and will participate in a photo-op when the vessel has been lettered.