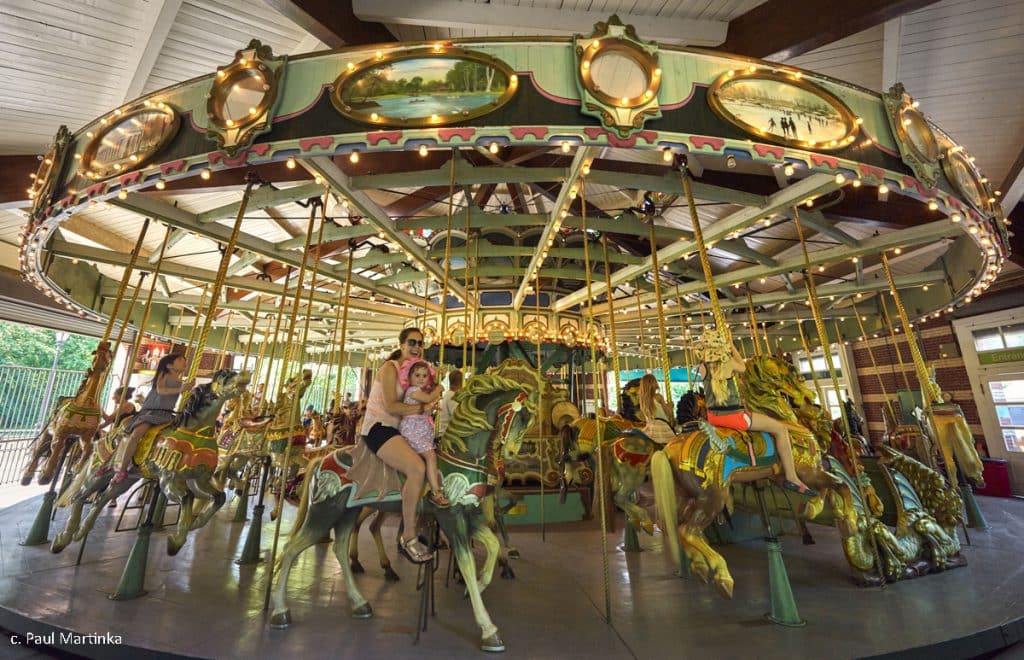 The Prospect Park Carousel is perhaps one of the most cherished destinations in Brooklyn. However, this is not the first Carousel in Prospect Park. Since 1874, Brooklynites have flocked to the Park to enjoy this warm-weather amusement. The original Carousel was horse drawn and located in the Vale of Cashmere at the northeast corner of the Park, which was designed as a play area for children. It was subsequently moved to the Long Meadow after a fire in 1885, in the area that is now home to the Picnic House.

Upon the creation of the Children’s Corner in 1952, the current Carousel was brought to the Park from Coney Island. A gem of craftsmanship, it features 53 hand-carved horses, a lion, a giraffe, a deer and two-dragon-pulled chariots created by the renowned carver Charles Carmel in 1912. Carmel was trained near the Prospect Park horse stables, which enabled him to create masterfully lifelike creatures. The Carousel is one of only 12 of his works still in existence. In 1983, mechanical problems and deterioration forced the Carousel to close.

Four years later, the Prospect Park Alliance raised $800,000 to restore this Brooklyn treasure as its first capital restoration project. The mechanical components were repaired, twenty layers of paint were removed, and conservator Will Morton VIII skillfully recreated the historic design. Morton also added 60 renderings of Brooklyn and Prospect Park referenced from historic photos. The newly restored Carousel was opened to the public in October 1990. It is maintained to this day by the Prospect Park Alliance.